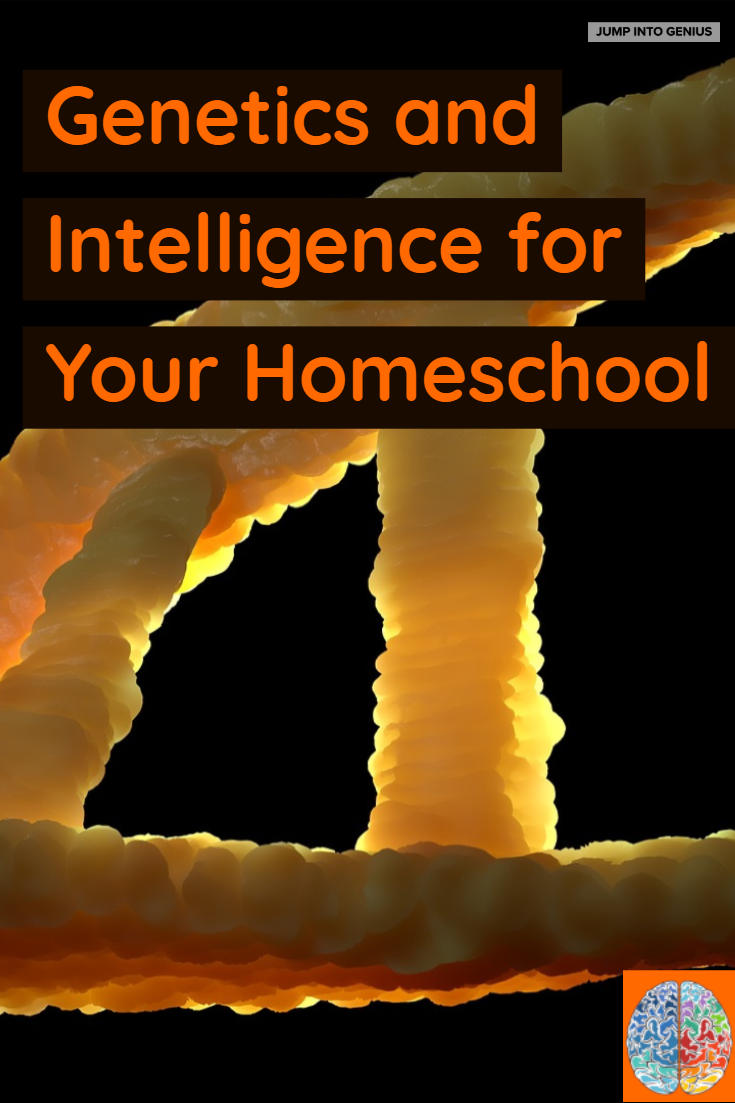 There is no nature vs. nurture war, but an interaction of nature and nurture. What does this mean for our homeschools? This means your slow learner can become a fast learner. Because you can train their brain to learn better. This is also why I don’t like labeling slow learners or gifted kids. Both labels cause more problems than they solve. Even homeschoolers have a long way to go in understanding intelligence, the proof is in the fact that will still try to sort out our children using these labels and even purchase products based on these labels.

Sometimes our own limited imagination keeps us far behind the revolutions science has revealed to us. Let’s dive into genetics and intelligence to free our minds from the idea that Sally or Joe can’t grow up to be doctors because they just aren’t smart enough. The truth is, most people never realize their full intelligence. And as long as we are surrounded with a culture obsessed with measuring our inabilities our potential will be left in the basement to fester.

If Sally or Joe dream of being doctors and the world tells them it just isn’t in the cards they were dealt the crushed dream will haunt them their entire life. They will always wonder, what their life could have been like if only they had been gifted more intelligence.

I know many people who started college with dreams of becoming a doctor. But a year in they decided they just weren’t smart enough. They didn’t change their mind about what they wanted to do, they did not decide it was too much work. They decided that their brain was not up to the task. These are all smart people. But society makes this lie so believable, when push came to shove, they believed it. They quit. They did something easier. Not because they are quitters, but because they never truly believed that the fate of our intelligence can be changed by how we nurture it. Perhaps no one ever told them they could choose to become smart enough to be a doctor.

What is a gene?

The field of genetics has received so much attention in the last few decades you would think it is a secret treasure map to all the gold in the world. If we just understand our genes we can cure all disease, know how smart our offspring will be, and solve world hunger. Right.

The only problem is, genes, by themselves, don’t determine much. They contain the codes for proteins. And proteins are important. But the codes they carry are not inactive blueprints. They are flexible and changeable.

David Shenk – The Genius in All of Us

When explaining how genetic mutations cause disease an analogy of wiring is helpful. You can cut one wire on a device and the device will no longer work. However, that wire is not solely responsible for the device working. All the other wires are important too. There are many ways a computer can break. And the human body, being much more complex than a computer has many more things that can go wrong. Genetic mutations are one of those things. But knowing that a certain genetic mutation will cause a disease gives us a broken idea of how healthy genes work.

Genes do not determine behavior. They do not even determine physical traits like height to the extent we have been led to believe. I don’t mean they have no role at all to play in height. But a persons height is also determined by the enviornment. When a researcher from the Stanford School of Medicine compared the heights of Japanese children raised in California to Japanese children raised in Japan the research showed how much the environment affected the height outcome. The California kids had better nutrition and medical care (this was in 1957) and grew 5 inches taller.

We now know there are many things in our environment that interact with our genes to determine our height. It is not pre-set at birth but develops as a result of the environmental feedback received throughout childhood.

This brings up the question of what environment we are raising our children in. If all kids are raised in an enriched environment than we are ensuring that their environment is not holding them back. Our children need more than normal.

It appears that the enriched environment tells the genes to make the rat smarter.

And there has been plenty of research since that time to show that in this sense, humans are not much different than rats. Our environment makes a big difference in how smart we become.

The rich environment for the rat is one with stimulating toys and walls painted in rich, bright color patterns. Rats like toys such as rattles, bells, ramps, swings, slides, and mirrors.

The restricted rat environment provided only a food box and a water pan.

The normal rat environment had plain walls with a couple of sensory and exercise toys.

What is a rich environment for a child?

Keep environment in mind as you design your homeschool

Of course, children are a bit more complex than rats and to provide a rich environment they need more than rattles, mirrors, and slides, although those kinds of toys are always a good start.

They need time to play outside, as the outdoors are a very complicated environment with many sights, sounds, textures, and sensations to build the brain’s sensory systems.

A child needs a lot of exercise, you can’t just give them a rat-wheel to run on and call it enriched. They need spaces to move in, things to balance on, stuff that makes them dizzy, and to get sweaty from movement every day. The movement builds the brain.

A child needs problems to solve. So they can practice their reasoning and critical thinking abilities.

A child needs basic ‘stuff’ to create with. They need the home to be a maker studio where they can try out their ideas and see if they work. They need to create to build their creative abilities. (I don’t mean you need fancy machinery, paper will do millions of things if you let your kids’ mind’s loose on it.)

They need love and laughter and learning and lettuce (along with other nutrient-rich foods), these things all build the brain too.

A rich toy is not a toy that has one use, or one way of being played with. A rich toy is a toy that can be used in many ways and that your child can interact with, or use as part of their own creative schemes.

A rich curriculum is not one that simply introduces concepts to your child and then asks them to regurgitate the info. A rich curriculum will fill their minds with complex language and ideas, encourage them to ask questions, and lead them into solving problems and creating things or ideas.

And if you don’t have a mini-trampoline for your kids to jump on when the weather only lets them out for short stints, go get one. They are only $40 and every time your kid jumps on the thing they are building neurons and leaving you alone for a few minutes.

What do you have to lose?